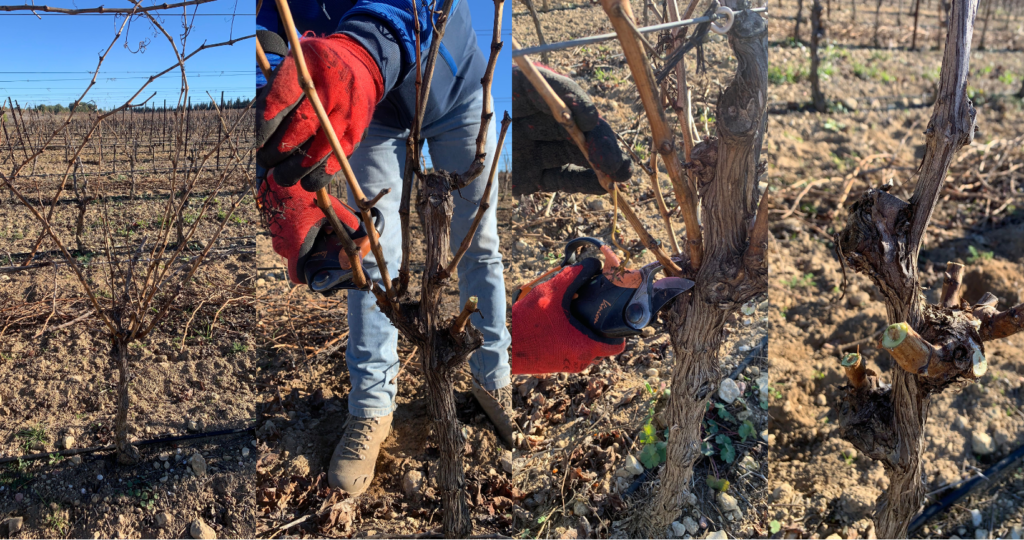 Did you know that? Every year at the same period takes place the pruning.

Pruning is a viticultural practice that is carried out every year from December to March during the winter rest period of the vine (period when the sap no longer circulates in the vine). As the vine is a liana, we prune it every year to control its growth.

What is it used for?

The primary objective is to maintain the shape of the plant. It allows to limit the constant growth of the vine and then to regulate and determine the quality and quantity, on the future production of grapes in summer. The last objective is to avoid the lengthening and premature aging of the grapevines.

Several types of pruning exist (cordon de royat, gobelet), at the domain, we use the simple guyot. The pruning is carried out by our winemaker Franck PALLISER and our wine worker Antonio. It is a meticulous work which requires a know-how and a knowledge of the functioning of the vine.

How to make a Guyot Simple pruning ?

The simple Guyot pruning consists in leaving a branch, also called a “baguette” (term used in Languedoc) or a “latte” depending on the viticultural region, with 6 buds. The selection of the location of the buds is important because they are the ones that will later turn into shoot (branch). These buds are also called eyes. At this lath, we also leave 3 spurs on our vine stock. Generally only one spur is left, at the domain we leave 3 because the vine produces low yields. This allows us to increase the quantity of the next harvest.

Once the pruning is finished, we attach the lath to the supporting wire of the vine and let it grow until the next year.